This page is a list of promotional cards and items that have been released for Arkham Horror: The Card Game. These promos fall into 2 broad categories:

If you’re looking to acquire some of the items here that are no longer available, you may have luck checking sites like eBay.

The promos listed in this section were given out at various Arkham Horror: The Card Game events. Fantasy Flight Games typically holds an event for the game every August at the Gen Con convention, as well as an event at their headquarters every October called Arkham Nights (which also celebrates Fantasy Flight’s other Arkham Files games). For the Arkham Nights promos, note that I’ve only listed the items related to Arkham Horror: The Card Game and I’ve omitted any items related to other Arkham Files games (such as Elder Sign).

Arkham Nights 2016 Promo Items
Description: In addition to getting to buy copies of the game prior to its initial November 2016 release, attendees of Arkham Nights 2016 received a set of acrylic health and sanity tokens, a chaos bag featuring the elder sign symbol, and an early copy of the Curse of the Rougarou standalone scenario.
Release Date: October 14, 2016 (at Arkham Nights)
Availability: The tokens and bag were event exclusives but Curse of the Rougarou has since received a retail release.

Arkham Nights 2017 Promo Items
Description: Attendees of Arkham Nights 2017 received a copy of The Labyrinths of Lunacy which included 1 alternate art Unexpected Courage card. They also received health and sanity tokens and a chaos bag featuring the “auto-fail” tentacles. A card storage box was planned but it was not ready in time for the event (it was to be shipped to attendees at a later date).
Release Date: October 13, 2017 (at Arkham Nights)
Availability: The tokens, chaos bag, and storage box were event exclusives. Labyrinths of Lunacy has since received a retail release. The retail version of Labyrinths does not include the Unexpected Courage promo.

Arkham Nights 2017 Player-Designed Cards
Description: At Arkham Nights 2017, 2 groups of attendees were chosen by lottery to participate in card-designing councils. Beta copies of the 2 cards that these councils designed (The Council’s Coffer and The 13th Vision) were distributed to all Arkham Nights attendees.
Release Date: October 14, 2017 (at Arkham Nights)
Availability: The beta versions were only given out at the event, but The 13th Vision was printed later in The Circle Undone deluxe expansion (with some minor changes). The Council’s Coffer has yet to see print.

Invocation 2017 Event Promo Items
Description: As part of Fantasy Flight’s organized play program, game stores were able to order kits to hold Invocation events in late 2017/early 2018. These kits include the following promos for participants: an alternate artwork Daisy Walker investigator card (with an extended art frame); a plastic Daisy Walker mini card; and a playmat featuring the artwork from Eixodolon’s Pet.
Release Date: December 16, 2017 (this is when these events started, but individual stores choose their own dates to run events)
Availability: No longer available.

Gen Con 2018 Scenario & Extended Artwork Lucky! Cards
Description: Attendees of Fantasy Flight’s Arkham event at Gen Con 2018 received a copy of the scenario The Eternal Slumber. Also included was a pair of Lucky! cards with an extended art frame (one copy of the level 0 Lucky! and one copy of the level 2 version).
Release Date: August 2, 2018 (at Gen Con)
Availability: The Eternal Slumber is now available at retail as part of the Guardians of the Abyss scenario pack (together with the other 2018 event scenario, The Night’s Usurper). The retail version does not include the extended art Lucky! cards.

Arkham Nights 2018 Promo Items
Description: Attendees of Arkham Nights 2018 received the following gifts: an “eldritch emblem” chaos bag; a card storage box; a set of acrylic health and sanity tokens; the Invocation 2018 playmat; a promotional poster for The King in Yellow; and the scenario pack The Night’s Usurper (which also included an extended artwork Drawn to the Flame card).
Release Date: October 19, 2018 (at Arkham Nights)
Availability: The gift items are not available. The Night’s Usurper is now available at retail as part of the Guardians of the Abyss scenario pack (together with the other 2018 event scenario, The Eternal Slumber). The retail version does not include the extended artwork Drawn to the Flame promo.

Arkham Nights 2018 Player-Designed Cards
Description: Like the previous year, there were 2 card councils at Arkham Nights 2018. Beta copies of the 2 cards that were designed (Dendromorphosis and Ikiaq) were distributed to event attendees.
Release Date: October 20, 2018 (at Arkham Nights)
Availability: Not available, but these cards may see print in a normal expansion later on (possibly with refinements).

Invocation 2018 Event Promo items
Description: 2018’s Invocation kit included a copy of The Eternal Slumber, a pair of extended artwork Lucky! cards (one copy at level 0 and one copy at level 2, just like what players received at Gen Con), a playmat featuring artwork from The Night’s Usurper, and a set of player card dividers.
Release Date: October 2018 (this is when these events started, individual stores choose their own dates to run events)
Availability: No longer available (except The Eternal Slumber which is available in Guardians of the Abyss).

The promos listed in this section were distributed alongside Arkham Files fiction releases.

Some of the investigators featured in these promos haven’t been previously released for Arkham Horror: The Card Game, so for now those characters – Norman Withers, Carolyn Fern and Silas Marsh – are exclusively available through these novellas. The signature cards that come with the promos for these 3 new investigators are still technically replacement signature cards, and the back side of each investigator card teases the names of the “regular” signature cards that will one day accompany their normal release.

The first 5 of these investigator-focused novellas seem to have been created as a group, and all 5 have all been released at this point. While it’s possible Fantasy Flight has more Arkham novellas planned, no more have been announced.

These novellas are still being regularly reprinted by Fantasy Flight but they have a tendency to sell out quickly and the reprints don’t come at a very quick pace. It appears as though Fantasy Flight intends to continue including these promo cards with all physical copies of the novellas for as long as they are being reprinted. Note that digital copies of the novellas do not come with the promo cards (not even images of them). 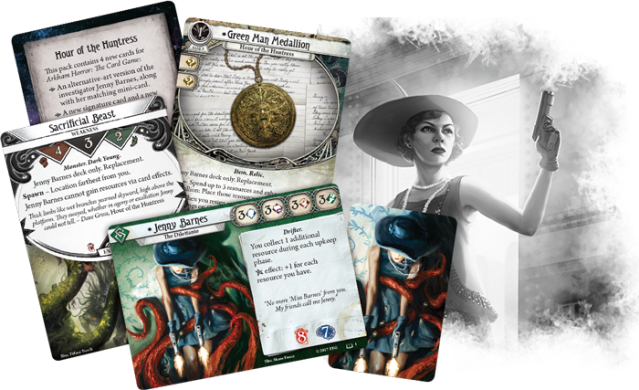 If you run an Arkham-related blog, podcast, channel, or tool and you don’t see it listed above, please feel free to contact me about getting it added. I try to add links to new sites and channels as I come across them but I know I miss some.